A conversation with Carol Sasaki

Q: Why did you start IHF?

A: The answer to IHFŌĆÖs beginnings is three parts. I started IHF out of my own life experiences and my work in the USA and studies overseas for other children in similar situations.

Q: What are your own life experiences?

A: I ran away from home at age 13 from the sexual abuse of an esteemed godfather. I didnŌĆÖt think anyone would possibly believe me. I had no background or survival skills for living on the streets and would not have made without the help of mentors of various backgroundsŌĆöhellŌĆÖs angels, civil rights leadersŌĆöa vast array of humans helped me. I was a blabber mouth and an unwed mother who considered herself too stupid and with too many learning disabilities to be capable of college and self-sufficiency. Even experts who tested me told me I was incapable as well. When a mentor helped me learn to think linearlyŌĆöA to B to C (the opposite thinking needed for street survival skills)ŌĆöshe had me take the same Pass-It-On vow she took when she was helped.

Q: What is the Pass It On vow?

Q: So you made it out of the trap?

A: The same brain that could not pass a high school GED was now receiving academic awards. In a speech for one of these awards I found myself telling secrets I was ashamed of. This speech is what grew into HOME which grew into SAVE and IHF. I told a large, stunned audience of my past including the sexual abuse. I found myself saying:

I know that the street kids, the welfare mothers that helped me from that past are every bit as smart as all of you in this audience and myself. I didnŌĆÖt understand until my mentor showed me how we are each smart in different ways and how that can be channeled into a common language. Please allow me to work with some of these street children and welfare women. Allow me to work with them as my mentor worked with me. If they can pass the entrance exam, allow them to attend this university. If you donŌĆÖt believe me, allow me to do this like a scientific experiment so you too can find out if this is true.

The university allowed me to do this and the success led to other universities doing it. This began the HOME communication channel, Helping Ourselves Means Education. During the growth of HOME, I received funds for my graduate studies, a comparative look at what happens to street children and unwed mothers worldwide. The question for me was which runaways and unwed mothers were able to make it out of poverty without doing it through the bed of a man and what societal systems were most effective in helping them do so.

In Thailand, many of the children and women I met were not following the pattern of running away from abusers. Instead they were hunting for sisters or daughters that had been stolen or missing from their mountain villages. This led me into the world of sex slavery when I tried to help with a rescue. I left to continue my studies in India, promising I would return. The police chief of Thailand introduced me to the Police chief of Bombay (Mumbai). He and Khunying Khunita (female lawyer and head of Thai tourism) encouraged the Bombay police chief in gathering further proof of the widespread existence of human trafficking. The police chief of Bombay offered to help me, saying he had the same determination for the world to address this issue.┬Ā

In India, through a mutual friend from my university, I was introduced to an amazing human rights lawyer and his assistant, Ramu. He insisted Ramu accompany me while taking photos of the caged women and as planned, later that night to meet with BombayŌĆÖs police chief. The lawyerŌĆÖs instincts were correct. It is this police chief that ultimately tried to take me into sexual slavery and tortured to death Ramu, who diverted the policeŌĆÖs attention so I could escape.

That night in hiding, I retook the vow I gave my mentor: if I make it out of this trap, I vowed that RamuŌĆÖs life would not be in vain, and I will dedicate my life to working on this.

When I returned to the U.S. I came back to a house full of mail bags from the post office. While I was gone, they had done a television special on my work and I found thousands upon thousands of women from all over the country telling me of their sexual abuse, why they left home, why they were on welfare. They explained in detail the situations they were in and why the yearned to go to college in order to be self-sufficient without having to do it through the bed of man.

I did not have time to process what had happened overseas. I continued supporting the sex slaves that had to remain in hiding (a very complex issue as it impacted their village and loved ones). I was also swallowed up by the needs and demands in the U.S. When I won the presidential award on my work and ensuing my publicity the amount of welfare women and poverty children wanting to be involved in HOME grew exponentially.

Side by side with this, each time I spoke about sexual slavery, an odd look would appear in peopleŌĆÖs eyes. I was asked by TV shows not to bring it up. At a UN conference I was told it did not exist or I must be exaggerating it. At my university, while giving a speech about human trafficking, sexual slavery and my experiences, I was asked off stage and I was hurting HOME by speaking about it. My university president believed me, but asked me not to talk about sex slavery anymore. By this time I was working for the president of the United States as a consultant with Charles Hobbs (director of domestic policy) and while he believed me, he also asked me not to speak of it. I finally had enough and refused to appear on the OPRAH Winfrey show unless I was able to talk about sexual slavery; they did not want me on the show and said if it was true, they would have heard about it.

While continuing to support the women overseas, and trying to legislate the HOME education and mentor program nationwide, I promised myself to someday focus on this huge and dangerous gap of information between the abused and those that develop policy.

I felt the world needed some kind of leadership program to be implemented to address these problemsŌĆöleaders who are far more knowledgeable because they have come from sexual slavery and other forms of abuse or have interacted intimately with them.

The story of SAVEŌĆÖs growth is too long and comprehensive to go into now, but it became clear that I needed some safe way of getting further help in the work we were doing.┬Ā

Q: What kind of work did you need help with?

A: In the early 80s, AIDS was not well understood and as a result, many of our sex slaves died from contracting it. The villages were frightened by this and the women were mistreated, left in huts by themselves in dire need. They people of these villages asked me to find their children and younger siblings in the villages they originally came from and help them to not be taken into sexual slavery. I made more promises to dying loved ones than I should have and had more children to take care of than I could handle. I knew this was a lifetime commitment. In discussing this with a girlfriend (whoŌĆÖs daughter went to school with me), she asked, canŌĆÖt you separate SAVE and the rescues where itŌĆÖs too dangerous for the volunteers, to homes for these children and a preventive program that would be safe for volunteers. So, in 1998, this began the separation of SAVE and IHF. We formally incorporated IHF into an independent 501(c)(3) non-profit in 2001. You can see in IHFŌĆÖs mission statement the goals that reflect from my own life experiences: to educate impoverished childrenŌĆöactivating their highest potentialŌĆöand educate global citizens, through real life experiences, about the realities of impoverished communities, the value of other cultures, and the many responsibilities of running an international NGO.

Q: Why did you chose Thailand, Kenya, and Indonesia?

A: SAVE continued its work in South America, Central America, Eastern Europe, Eurasia and Africa. For IHF, it is obvious why Thailand, because of my promise. For Kenya, that was where the UN and much of the humanitarian aid money for all of Africa flowed through, so the end of the tail (so to speak in the corruption of human trafficking) often led to involving people from around the world, not just Kenyans.

In Bali, Indonesia, I built a vacation home for my children because we were living with nomadic tribes in very remote areas and I wanted them to have a home nearby to return to as a base. My daughter loved Bali and my son was now in college. We did work in education with students in Jakarta and other localities, but Bali was our base. There are many human beings I should tell the stories of, but we can do that through the website over time. For now, I will do that a bit through the IHF Bali center and a bit of the IHF Kenya center, and we can focus on the other centers in the following months.

Now I am in my mid-sixties, and those grown children of IHF (and SAVE) all gloriously PASS IT ONŌĆöthanks to my mentor. 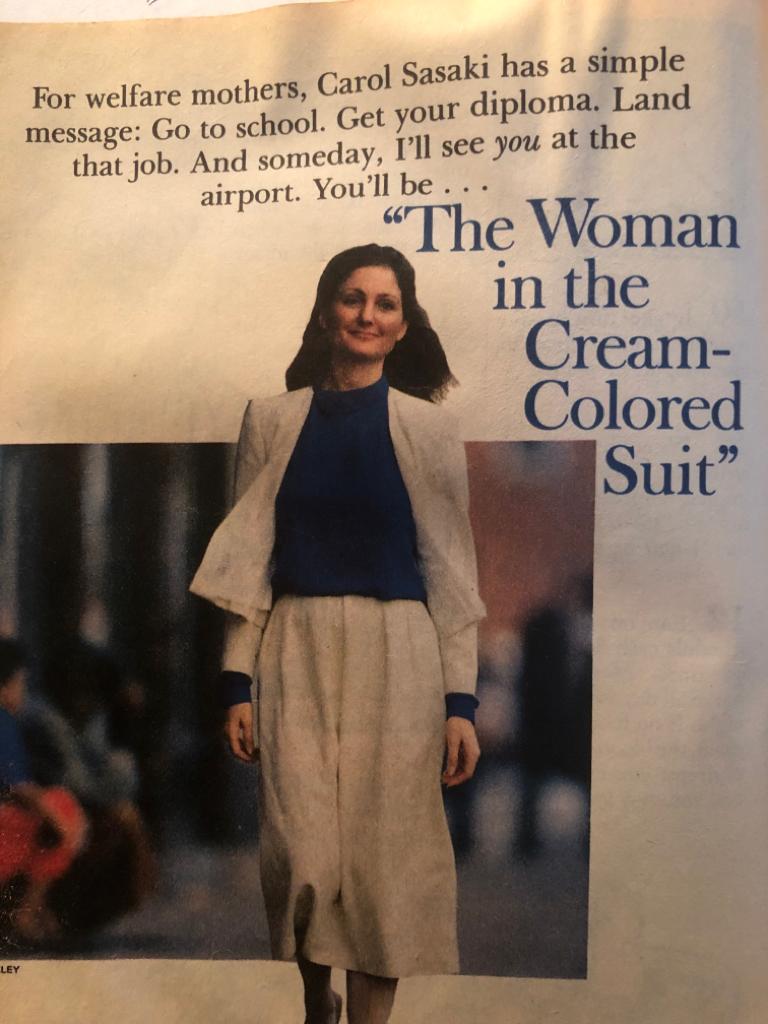 Carol Sasaki worked for two USA Presidents (of both parties) and won numerous awards, including the USAs Volunteer of the Year. She also appeared in numerous magazines such as┬ĀReader’s Digest┬Āand┬ĀPeople magazine. Her focus is now dedicated to the children and grown students of IHF who have amazing stories to share from around the world.

Bali has always been IHFs smallest Center. Serving only 70-200 children depending on year and time of year. Whereas the other centers have 200-300 students and classes serving 600-800, Bali remains small and is not near any large city. Classes focus on Math, Computers, and English. With various other workshops and subjects when needed. It is a very low-key center, making it a good place to start if you havenŌĆÖt volunteered overseas before. The center is old and not fancy (needs a new roof!) and the lifestyle simple. You will hear geckos and frogs and birds and motorbikes and childrenŌĆÖs laughter and the beach lapping (pebble beach) and the beautiful prayers daily all overlapping. IHFs motto, “slow quiet growth nurtures deep roots,ŌĆØ is learned from the lifestyle here.

Kenya History is in photos below. It is a very long full history with much to learn from and one we need to write in detail for next months HISTORY HIGHLIGHTS. So rich in both painful and Joyful Lessons. For now we will tell part of its story in photos. You will see some photos of our work in Kebete Slum and Subukia and the East Central Pokot center that led to our buying the Nakuru Center and locating the children there. The photos tell a bit of why and the journey. Next month the more detailed History will tell more. See you then!