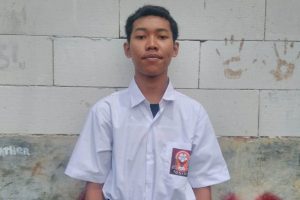 Rahmat is one of the most active students in IHF. He likes to skateboard and try something new. He mostly likes science things and exploring things outside the house. He is the second child. He has one older sister and 3 younger sisters, two of them also IHF students. His mom passed away four years ago because of sickness. His father is selling junk near the train station and brings home between whatâ€™s equivalent to US $2 to 3.5 a day. Sometimes his father doesnâ€™t bring home money and his little sister does street singing to earn money. The family lives in a slum area near the center, in a house consisting of one room acts as a living room, bedroom, kitchen, and toilet. One of the walls in their house has a big hole from a broken window, and they could only cover it with newspaper and cardboard. Every day they get help from their neighbor as well. They like to give them food or money for daily expenses.