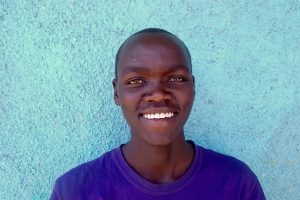 Ayuko is a very special guy; he is funny, generous and always positive, some say he is also the best cook at the center! Ayuko comes from a large family and is one of two sets of twins. Ayuko has worked extremely hard on his studies over the past year and has made steady improvements which he is very proud of. Ayuko joined IHF at around 5 years old. He likes Nakuru because is it a very safe and stable place to live compared to other parts of Kenya which can be often dangerous. When he thinks of Pokot, Ayuko thinks about the singing and dancing at traditional ceremonies, although he claims to be a watcher rather than a dancer! Ayuko dreams one day of seeing the Pyramids in Egypt but would settle for the opportunity of becoming an engineer in Nairobi, with 2 years left at school. With his wonderful personality, balanced deminer and committed personally he will be an asset it whatever he decides to do.