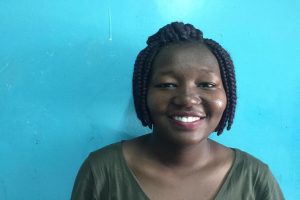 Student in Need of University Tuition

Chembalaw has been at IHF, along with her younger sister, for several years. She likes to be called Janet by her friends. Janet possesses a strong interest in languages and excels at English and Swahili in school. Janet enjoys taking on the role of being a leader and helping others. This young lady is now studying for a certificate in food and beverage and is enjoying the course very much.